Somebody asked me to summarize so that they could tell people on Twitter.

Just copy and paste these toots and writer your own thread on Twitter.

A Judas goat is trained to lead sheep to slaughter.

A Judas goat walks at the front of the herd, and the sheep follow into the slaughterhouse.

As part of its training, the Judas is shown a secret escape route.

So the Judas goat leads the herd to its doom but exits through a hidden doorway, so the herd never knows that they were being led by an enemy agent.

Donald Trump began planning his presidency in about 1980 at the latest.

You can see that in the interviews he gave.

"One man could turn this country around."

As part of his 40-year preparation for the presidency, Trump did two things:

One, he befriended REAL Democrats who were unhappy with the increasing leftism of the party.

And two, he planted his own agents who POSED as Democrats and climbed the political ladder.

These were Trump's sleeper agents.

Those people are the Judas goats.

A Judas goat will never be perceived as one.

For example, I'm quite sure that Michael Moore is a Judas goat.

Many of Trump's Judas goats are used only once.

After Trump was elected, Soros met with Democratic donors, and they hatched a plan to stop Trump.

Jill Stein demanded a recount. The plan was to delay the certification of the electoral votes.

If the electoral votes were delayed, the election would've gone to the House of Representatives.

But someone in the Soros meeting was a mole who told Trump about the plan.

So Trump defeated the plan in multiple brilliant ways.

For one, Stein filed for a recount ONE WEEK PAST THE PENNSYLVANIA DEADLINE.

All the big cheeses in the room left it to their minions to work out the details, so they were given the wrong deadline, which means that the Pennsylvania recount was a waste of time.

When the Stein people went to court over Pennsylvania and Wisconsin, Trump's lawyers revealed that Michigan's votes had already been certified and sent to Washington.

The Michigan votes put Trump over 270, so the ENTIRE RECOUNT was an exercise in futility.

A Judas goat told Soros and Company to go for the recount.

So they did, and they had their butts handed to them.

This has been happening since Trump won the election.

The Judas goats mislead the Democrats, and Trump comes out on top.

Take impeachment. Biggest backfire in American political history. But the Democrats are positive that if they JUST PUSH HARDER, it'll work.

The reason the Democrats are no longer skilled at politics is that they are getting terrible advice.

Judas goats are convincing them to commit political suicide.

Someone told Hillary to stagger out of her hospital bed and accuse Trump of DOING WHAT SHE DID.

All her own corruption will be exposed. First came Biden, and next comes Hillary.

It was Judas goats who gave us that hideous Swedish girl.

I actually didn't watch this at the time.

It's disgusting. She's the worst possible choice to do this.

All I see is Hitler. Her face is contorted with hate.

Name a single high-profile leftist who is likable.

They all grim, nasty, humorless, and HEAVY.

In the past, leftists always said that they lost because they didn't go far enough.

The Judas goats have convinced them that they finally need to go all in.

That's why we have the demented Green New Deal.

And that's why the Democrats are saying openly that they will raise taxes on the middle class, eliminate our borders, and give free EVERYTHING to illegal aliens.

Here's a term that Democrats no longer understand:

An idea not announced explicitly.

NOW, they say exactly the right thing to drive away voters.

Democrats are promising lawlessness, poverty, and classism that elevates illegals over citizens.

It's madness that can't win elections.

And that's the genius of using Judas goats.

In my recent rewriting of my memoir, I discovered that bureaucracies are shockingly vulnerable.

Once you get INTO a bureaucracy, you can do whatever you want, as long as you provide the right paperwork.

The Democrats are doomed. There are tens of thousands of Judas goats.

Trump is a long-term strategist. He understands that leftists always overreach.

The Judas goats are telling the Democrats to pile on in a frenzy.

The only reason piling on worked in the past was that people never fought back.

So the Judas goats tell the Democrats, "You didn't hit him hard enough."

Did you ever see the movie The Birds?

There's a scene in which Jessica Tandy is questioning her son Rod Taylor.

She's asking things like, "When will they come back? Why are they doing this?"

He's telling her he doesn't know, and suddenly she's screaming at him.

"WHY DON'T YOU KNOW? YOUR FATHER WOULD'VE KNOWN! IF HE WERE HERE, NONE OF THIS WOULD BE HAPPENING!"

There's a moment of shocked silence. The real person has been revealed.

She's totally crazy, and she hates her son.

The job of the Judas goats is to give us that Jessica Tandy moment.

My mom is almost 80 years old. She’s was a lifelong democrat. The democrats now make her cringe. She hates what they stand for with a passion! She’s the type person who speaks her mind regardless of whether or not it pisses ppl off. My mom was a diehard DEM. But she’s been singing Trumps praises for the past 2.5 years to everyone she knows and she’s been blasting Dems to everyone as well. If Dems turned my mom against them there’s no doubt Dems have turned millions more against them

They turned me. I do NOT like trump, but the dems behavior has me adamantly anti-dem as well now.

Their behavior has driven away many many people.

@freemo @MarcusJ65 @ThomasWic why do u not like him ? Glad u see them for what they are but perhaps you don’t understand him at all ...

Well there are different levels to that, there is the political side in which case I feel he just makes very poor decisions as a politician, almost to the point of absurdity. Though he has done a few things that were decent too so not a complete loss in that regard.

But on a personal level I mostly dislike him because his attitude shows insecurity and is otherwords obnoxious, his words are usually childish, hurtful, and not the sorts of things that inspire good, and when he talks he sounds like a five year old that has just mastered english, barely.

Long story short I really dont find many redeeming characteristics in his personality.

@freemo @MarcusJ65 @ThomasWic you don’t Get him. Everything his says and does is with purpose. You think he does not know what happens once he says an off the cuff thing? Ummm politically ... seriously? I can rattle off soooooo many things he has accomplished in his short time being fought like no potus in recent history as ever been fought. Maybe deep dive into him a little bit more.have u not noticed the things said about him daily. I could give two shits what obnoxious things and says.

I never claimed he knows or does not know what he says. I did say however I do not feel the things he say are things I like to hear, find valuable, or feel have value for americans to hear. Often I feel they are more damaging than good.

You are welcome to disagree with my stance on that of course. But it has nothing to do with how much he is aware of what he does or not. Him being aware makes it worse, not better.

To your other point, yes I've noticed the things said about him, yes i agree they are over exagerated, yes i even agree they are uncalled for and n many cases shouldnt be said. But I expect a president to be **better** than the people who attack him

@freemo @MarcusJ65 @ThomasWic that whole “acting presidential thing huh””. Yeah it has worked sooooo well for us this far recently. I could care less honestly. I don’t think I am better or anyone else is better than me based on how they speak. Rather someone real and genuine than a flipping puppet reading from a tele promoter being “presidential” ... I guess we just disagree here but imo the man is a genius while you make assumptions he is a moron based on verbiage he chooses to use. 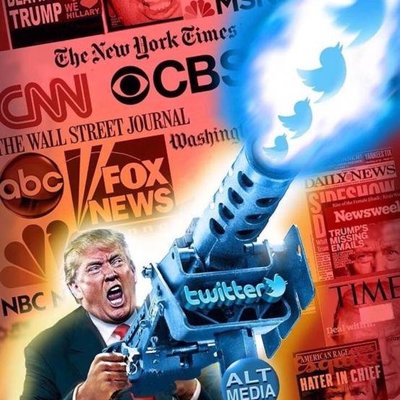 Ahh ok, then by that definition you would say Obama was as presidential as Trump then, since they were both equally presidents by law?

Of course. Zero was president & he pretended to be very presidential. Look where zeros Presidential behavior led us: 8 years of criminality.

The thing about PDJT is that he’s breaking the mold for what it means to be “Presidential”.

Maybe, just maybe, IF PDJT had NOT been attacked & viciously smeared by DNC/DEM/MSM/Hollywood/etc starting on day 1 of his presidency, and given the same consideration Zero was given, things may have been much different.

@MarcusJ65 @freemo @vince @ThomasWic i would argue his disdain and hatred for police and the calculated way in which he divided this country was hardly presidential. Of course he waited to take that mask off . Lying about benghazi was hardly presidential and obama speaking off the cuff was hardly what FREEMO describes. Too early in the am for this..

Huh? When did I say Obama preferred to speak off the cuff? I did say that when he did (however rare) it was evident he was far more intelligent than Trump. This has less to do with how smart Obama might be (somewhat) vs how unintelligent Trump is ( very)

@freemo @MarcusJ65 @vince @ThomasWic never said you said he preferred. I am saying your account of his oh so superior intellect when doing so is total bs ...

You are welcome to that opinion, though I find it to be an incorrect opinion to the extreme.

@freemo @MarcusJ65 @vince @ThomasWic of course u do ... eye roll

@freemo @MarcusJ65 @vince @ThomasWic mediocre student by all accounts- hides his college transcripts - lost his license... I hardly think I am the delusional one here .

He lost his license because of reasons of morality, not reasons of intelligence. There are plentt of marks against obama, most of which have to do with his morality NOT his intelligence, very different things. His license is a prime example of that as it clearly was not due to any failure in his intellect that lead to the issue in the first place.

As for if he was a good student or not, I dont particularly care about that for two reasons 1) that was a long time in the past, and I wasnt there to personally judge him 2) it is the opinion of others.

I would **much** rather judge his intelligence by how he expresses that intelligence int he present, rather than the opinion someone held of him from decades past.